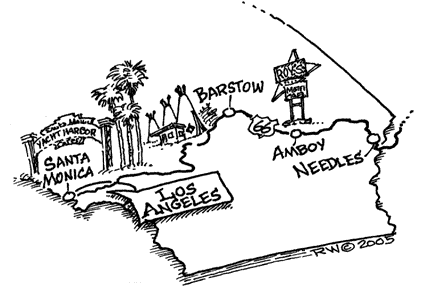 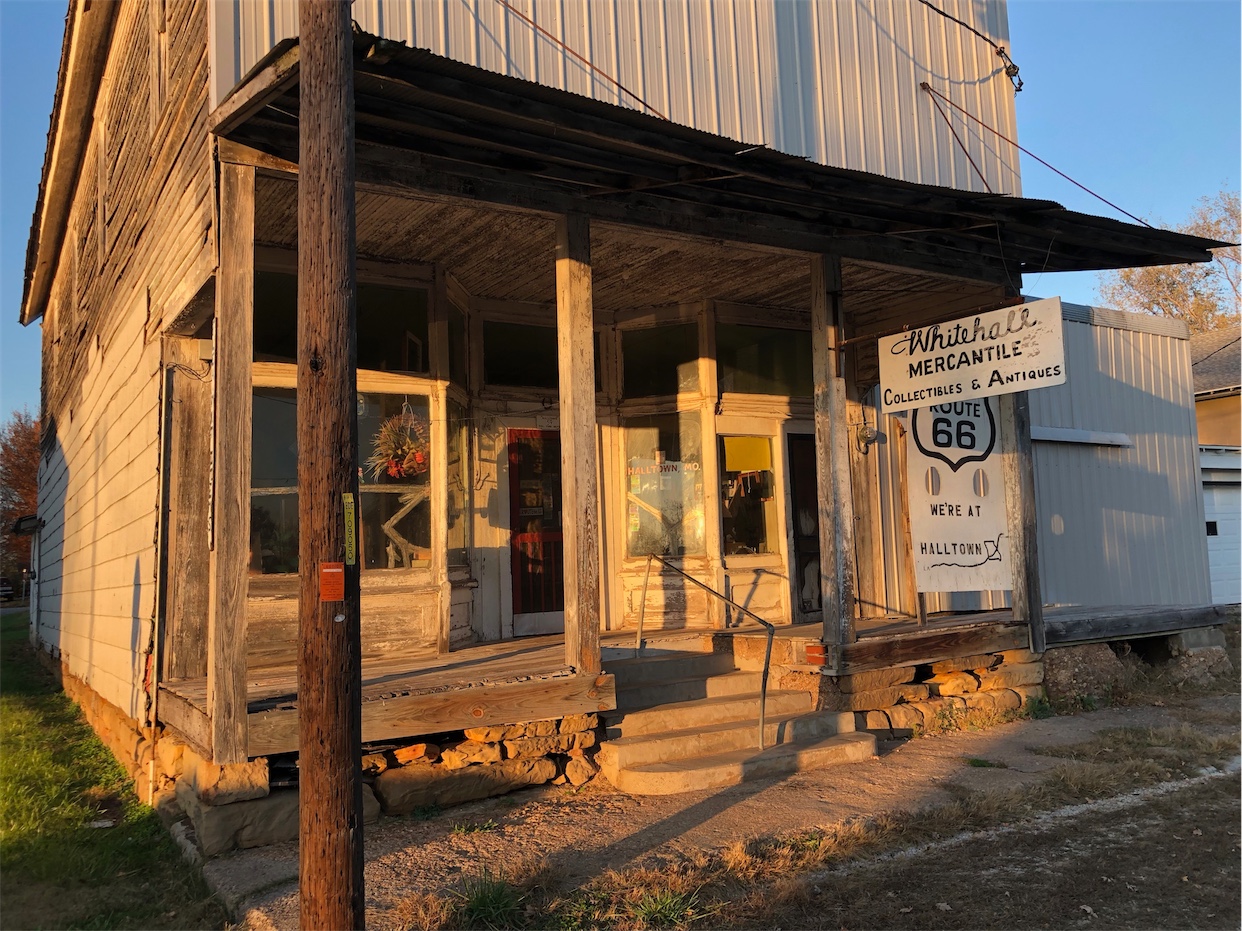 The Whitehall Mercantile was built in 1900. Thelma White, a founding member of the Missouri Route 66 ...

The rocky spines are what gave needles its name.

Enter California on I-40 (There’s not really much of an option here).

Older alignments and bridges across the Colorado:
Exit at the first exit (Park Moabi Rd.
Turn north on Park Moabi Rd.
Pass over the railroad.
Just after the railroad to the right is the abandoned 1926-47 alignment, continue straight.
At the T intersection with National Trail Hwy:
East on National Trails Hwy. (Park Moabi Rd.) (1947-66 alignment)
Continue under the railroad underpass.
Continue under I-40.
At the south side of I-40 you’re at the west end of the former Red Rock Bridge. This is were the 1947-66 alignment entered California. It was an old Railroad bridge that was replaced in 1945 by the current bridge on the railroad you passed under on as you got here.
Continue on south on National Trails Hwy. towards the 1917 Old Trail Arch bridge. That bridge carried the 1926-1947 alignment.
The 1926-47 alignment ran along the banks and then up the hill (abandoned.)
Turn around and head back to the intersection north of the Moabi Rd exit.
West on National Trails Hwy.
This is a dead-end unless you’re in a vehicle capable of driving a sandy wash, in which case you could cross under I-40 and find the other side of the 1947-1966 alignment.
Return to the Moabi Rd. exit and join I-40 westbound.

Agricultural inspection station. In the days of the dust bowl there was not much needed to turn a family back by the bands of armed people guarding the crossing into California.

Leave I-40 at the second exit (Five Mile Station Rd.)

Just past the eastbound entry to I-40 turn left onto the dirt road. Do not enter when chances are it will rain!
Continue till the overlook on I-40.
Return (unless you’re driving a vehicle capable of driving a sandy wash in which case you could cross under I-40 towards the alignment on the other side).

Continue on National Trails Hwy as it turn right (northbound).

Gas: fill up in Needles, after Needles you’re in the desert for many miles. Gas stations are far in between and not from major brands if that’s a concern for you.

Enter Needles on Broadway St. (US-66)

The covered wagon in the median. Once a sign for the El Rancho hotel, now welcoming visitors to needles.

At the fork with Front St.:

The next right street is called Route 66 Pl., a dead-end.

Turn left at the Y-intersection onto National Old Trails Highway 0.5 miles beyong the last off ramp.

Join I-40 westbound at the River Rd. Cutoff exit.

Continue on I-40 westbound.

Continue straight at the intersection with Essex Rd.

Sidetrip:Northwest of Essex are the Mitchell Caverns (in the Providence Mountains State Park).

Continue straight at the intersection with Danby Rd.

Danby itself is at the railroad to the left.

Cadiz itself is to the south at the railroad.

Graffiti made by turning the lava rocks on the right of the road.

Amboy got sold in may 2005 to Albert Okura (owner of the Juan Pollo Restaurants) and the plans include preserving and restoring the city.

Roy’s Cafe. The previous occupants were not really open to roadies, and only catered to the movie industry. The new owners seem to be much more promising (spring 2005) and plan to restore and reopen the place in its former glory.

Amboy crater to the left.

Amboy was once for sale on eBay.

Sidetrip: Joshua Tree National Monument to the south of Amboy

All that is left are a few pieces of concrete and one tree. Bagdad once had all a small town could have but was neglected after the mines closed and eventually razed during the construction of a pipeline when bagdad was used to store equipment.

While the original Bagdad Cafe was in this town, the one used during the filming of the cult movie is in Newberry Springs.

Cross the railroad tacks as you approch I-40.

The northern frontage road isn’t really Route 66. The old road ran to the south of I-40, to intersect with I-40 a mile or so westwards.
Route 66 Continued straight at the Crucero Rd. intersection straight onto Ludlow Rd.

Sidetrip: Ludlow Mercantile Company building to the south on Main St. near the railroad tracks.

Pass under I-40 at the Ludlow exit.

After almost 2 miles, Route 66 is again under your wheels. (the slightest of turns to the right is where).

The 2 lane got under and to the south of I40 for a brief moment, but there’s no way to follow it now.

Turn right to stay with the National Old Trails Highway.

Bagdad Cafe, where the movie was made.

West of town, cross I-40 as National Old Trails turns under I-40.

Continue across Hidden Springs Rd. on the National old Trails Highway near the Barstow-Daggett Airport exit.

Abandoned solar concentrator on the right.

Under the curved roof on the southwest corner was the 1930’s Cafe.

Across the tracks is the to be restored Stone Hotel, at an earlier route than Route 66 north of the tracks.

That Calico Ghost Town you’ve heard about by now, is to the north for about 7 miles.

Beyond Daggett, continue west paralleling I-40.

After 2 miles, use the exit for the Marine Corps Logistics Base.

Turn left from the off-ramp.

Back to California Find more advices for your trip plannig